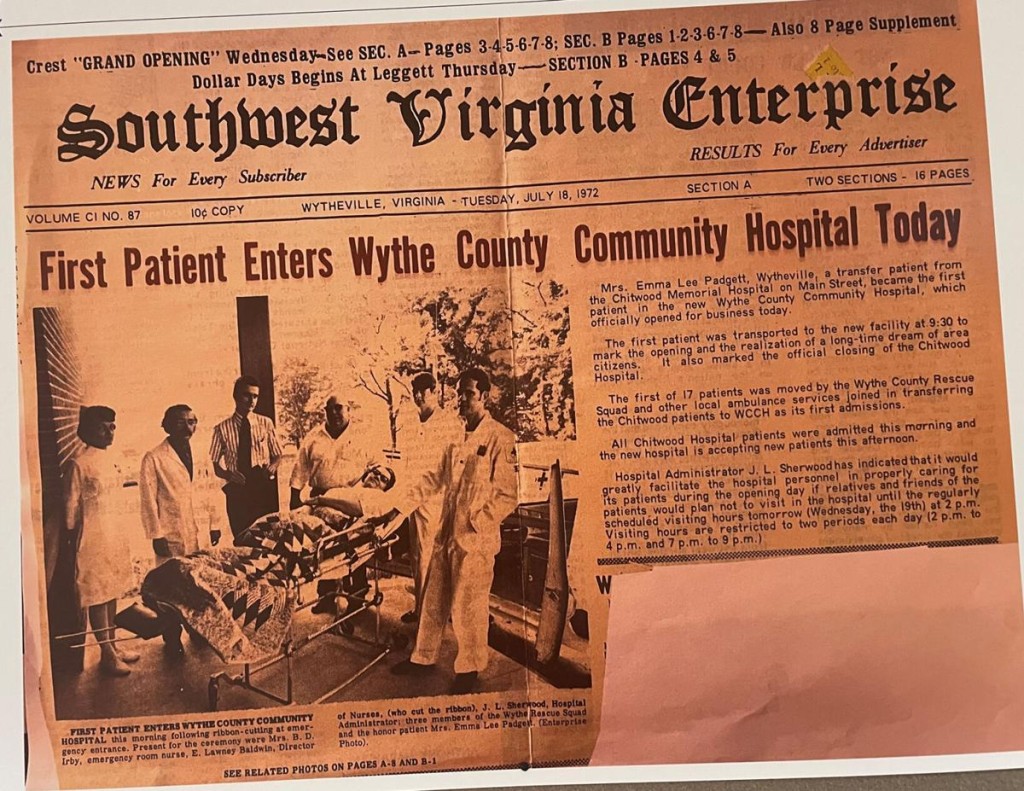 At 9:30 a.m. on July 18, 1972, Wythe County Rescue Squad members wheeled Emma Lee Padgett into Wythe County Community Hospital, which officially opened that day. She was the first of 17 patients transferred to the hospital from the Chitwood Memorial Hospital on Main Street.

On Thursday, WCCH officially celebrated its 50th anniversary with official speeches and shared memories from a longtime nurse and local leader and former Virginia Delegate Anne B. Crockett-Stark.

Hospital CEO Vicki Parks recounted the hospital’s history from its beginnings in 1933 when Dr. Ed Chitwood and Dr. Chimer Moore Sr. opened the first clinic in the upstairs area of the building now occupied by the Devoted to You Boutique. Fourteen years later, the Chitwood-Moore Hospital moved into a more modern facility on the second floor of the Leggett Building. Moore eventually sold his interest and the name was changed to the Chitwood Memorial Clinic.

In 1967, the current hospital site on West Ridge Road was purchased and the Wythe County Board of Supervisors authorized a $950,000 bond referendum to build the hospital. Construction for a 50-bed facility started in 1967 and a Special Gifts Campaign was started along with a $1 million mortgage from the Wythe County Industrial Development Authority.

Eventually, plans for a fourth floor materialized, enlarging the hospital to a 100-bed unit. The hospital dedication ceremony was held May 13, 1972.

The hospital has progressed and changed over the years and encountered challenges along the way, especially over the past two years with the COVID pandemic, Parks said. “The hospital has worked to create a culture that feels like family when you walk through the door because we are all family,” Parks said.

David Dill, chairman and CEO of LifePoint Health, agreed. “It’s family taking care of family,” he said, adding that the hospital led from the front lines during the pandemic. The hospital’s success is because of partnerships between hospital leaders, employees and the community, Dill said. When the hospital opened, it employed 80 people. Today, there are more than 330 employees. In the past 50 years, the number of providers has increased from 17 to more than 150, Dill said. Dill said the hospital will continue to grow, expand and renovate during the next 50 years. “It has been an honor to be your partner over the past 17 years,” he said. “It’s been a tremendous 50 years and the future looks brighter than ever.”

Crockett-Stark recalled riding horses on what is now the front lawn of the hospital. Her family sold the land for the hospital and made a large donation for the construction. She said the hospital has not stopped evolving since then. “It was a wonderful repurpose of farmland,” she said.

She said Thursday’s celebration was not for the brick-and-mortar hospital; it was for the leaders, employees and community members who made it happen. Yes, the Industrial Development Authority and Board of Supervisors made large contributions, but others contributed too, including school children, Sunday School classes, civic groups and individuals. “All of them matter because (their contributions) come from the heart,” she said.

She recalled several stories about the hospital, including one about her brother who was hospitalized to have his tonsils out. One day, he lassoed a nurse who walked into this room. The nurse called his father and told him, “you need to come down here and spank him,” Crockett-Stark said. “And Daddy did. That’s small town service.” She also remembered when country music icon Randy Travis was admitted to the hospital. Her husband, physician Carl Stark, treated him. “He called and said I have Randy Travis in the hospital in ICU because the nurses and others want to look at him and get his autograph,” she recalled. “Then he said, honey, who is Randy Travis?”

Lavonne Blessing, a nurse at WCCH for 35 years, remembered the hospital’s strict dress code when she arrived at the hospital: white uniforms, white support hose that increased dressing time, white shoes and a white cap, which she brought to the celebration. “Everything was white and we were proud to wear white,” she said. “You could forget your name tag but you dare not forget your cap.” She said she has seen a lot of changes of the years, including moving from paper to computers, non-profit status to profit, shorter stays and the move from glass thermometers to electronic ones. Temperatures are taken instantly. “There’s no minute where you have to suck on that piece of glass,” Blessing said. Like the speakers before her, she reiterated that the hospital and community are family. “Being a small town hospital doesn’t mean we give less quality of care,” she said. “What it does mean is that we are family … and in the next 50 years, we will still be family.”